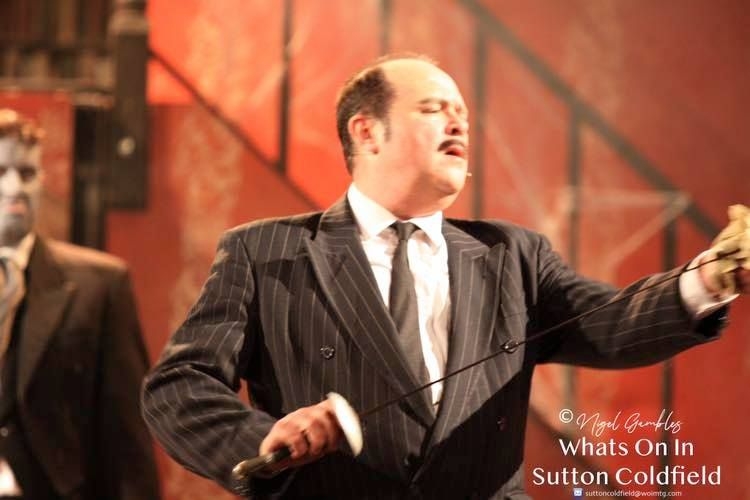 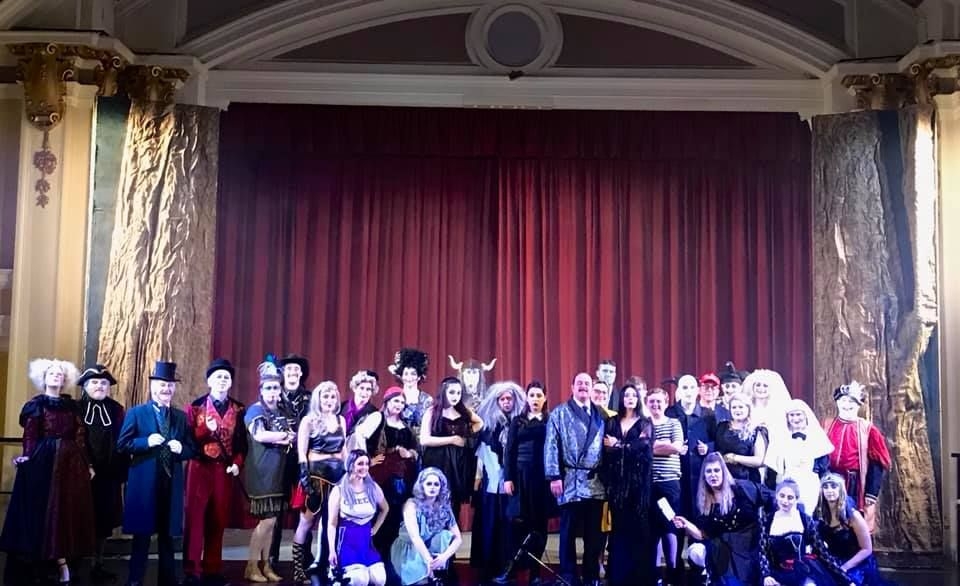 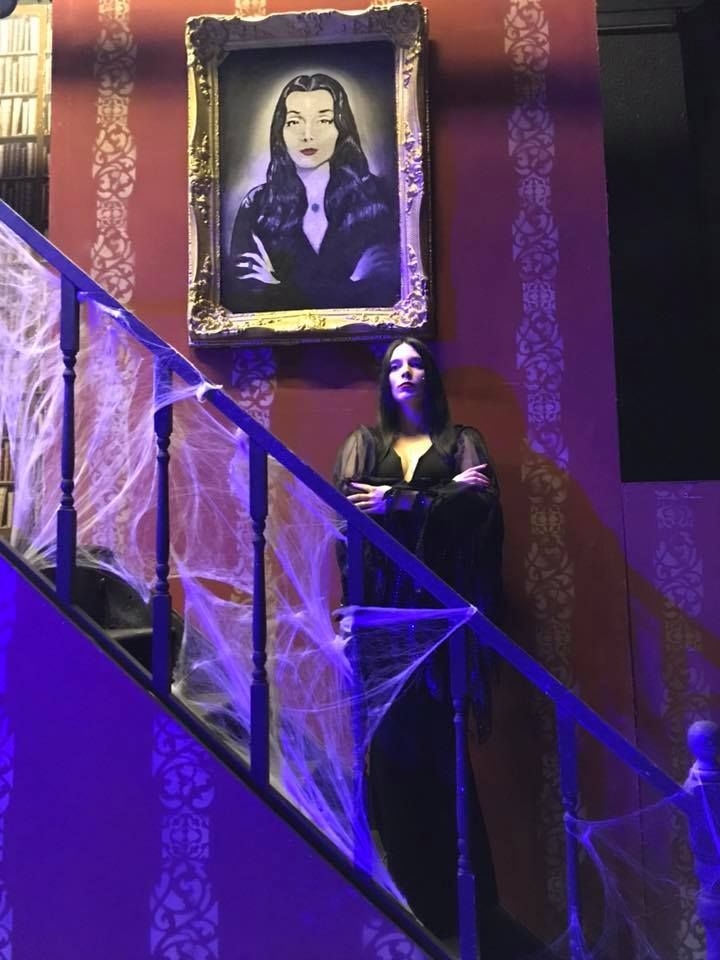 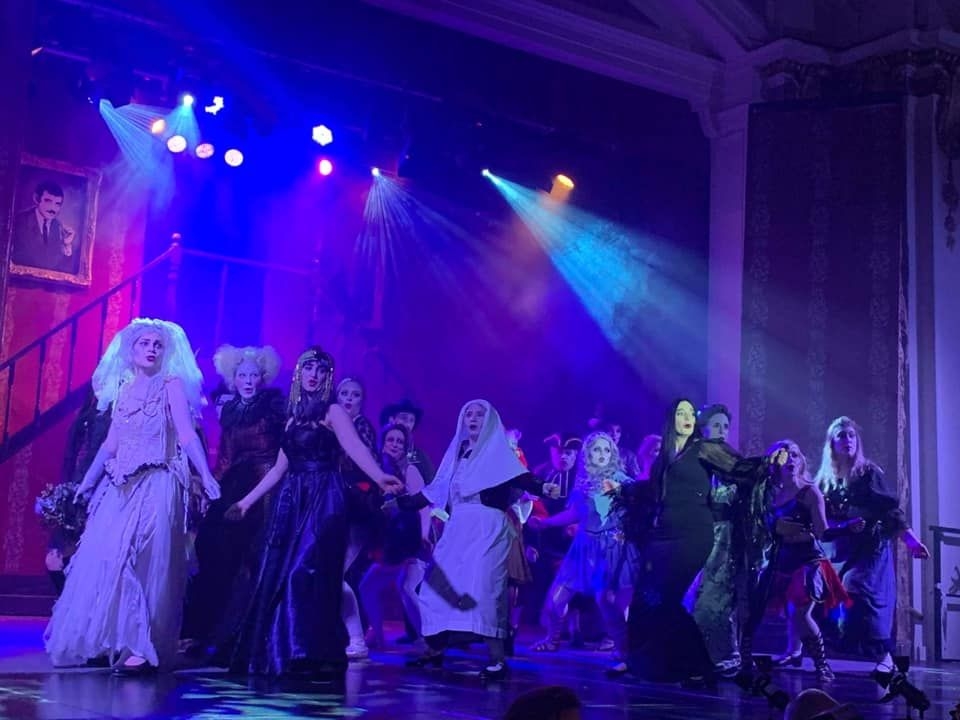 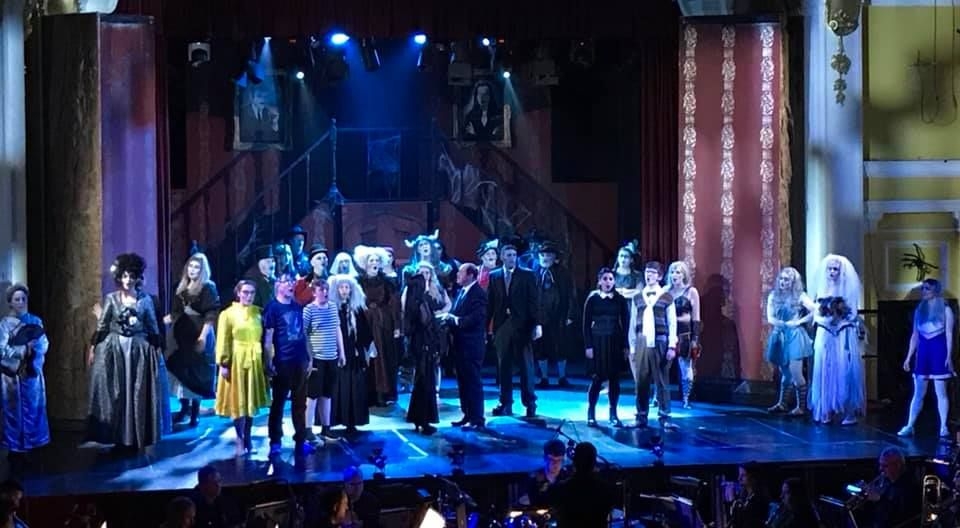 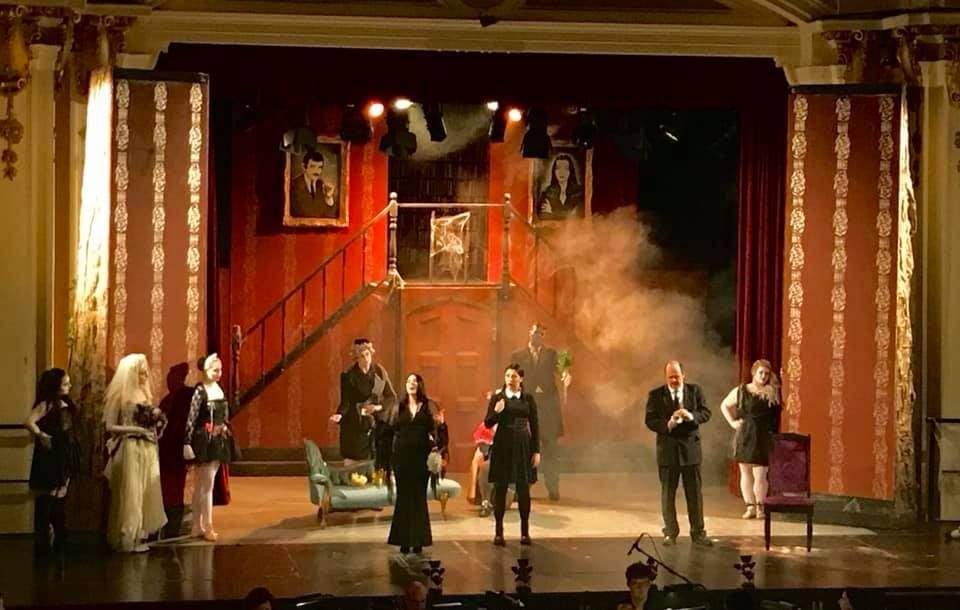 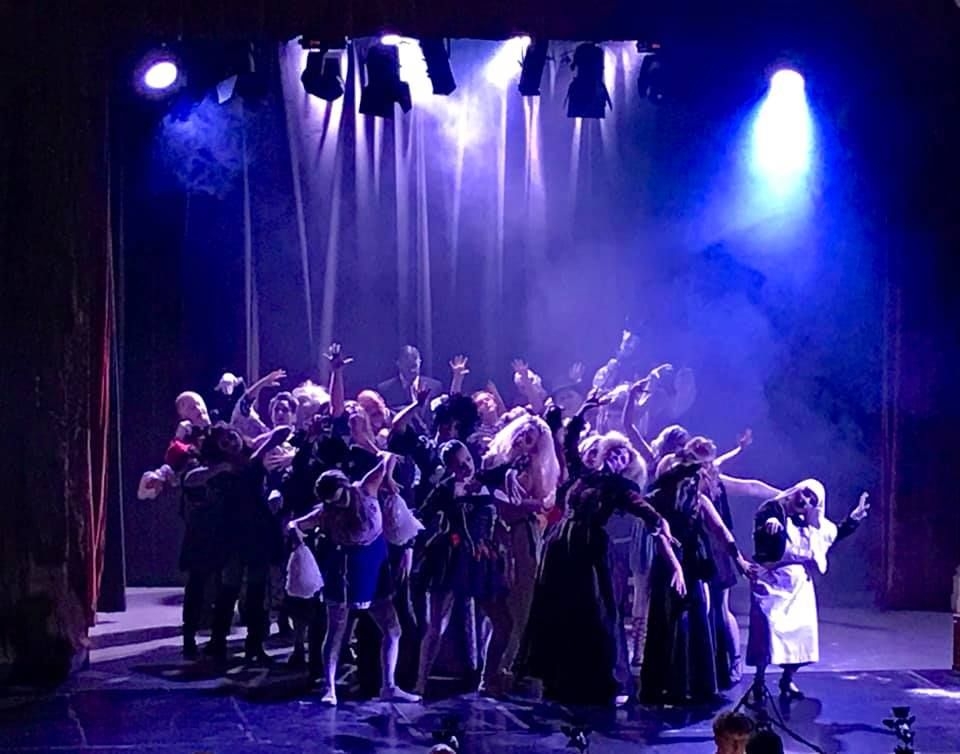 We had the pleasure of reviewing their 2018 production of Kiss Me Kate, and we were delighted to accept an invite by the company to the final dress rehearsal of this year’s annual production of The Addams Family.

attending the final dress rehearsal for this production. Even without an audience, the company under the direction of Pam and James Garrington, delivered an atmospheric, funny, energetic production. Every detail from the set, props and lighting to the excellent costumes (Triple C Costume Hire) and make-up (Charlie Freeman and Gemma Freeman) helped to recreate the spooky, zany world that we associate with the iconic Addams Family. There was also attention to detail with the creepy, spooky movement in the choreography by Maggie Moriarty.

I was extremely impressed by the talented orchestra led by Musical Director, Tim Harding, as they delivered this diverse score with precision and pizzazz. A few of my favourite songs from the musical include When You’re An Addams, Pulled and Waiting and I was not disappointed by the performances on the night.  It is always refreshing to see an amateur production where casting has been given a serious thought. Mark Skett gave one of our favourite male performances in an amateur production as the iconic Gomez Addams. This is a demanding role and Skett was flawless from start to finish, even his impressive Spanish accent never faltered! Where there is a Gomez, there has to be a Morticia and Beth Hooper gave a straight faced, confident, sassy performance as his gothic wife.  I really enjoyed the chemistry between Karrise Willetts, Wednesday, and Tom Lafferty as husband-to-be Lucas. Both have wonderful stage presence and vocals to match. This is also similar to the partnership and chemistry between Megan Daniels, Alice, and Richard Parry, Mal, Lucas’s parents. A stand out musical performance of the night was Daniels performance of Waiting as her impressive vocals flooded the Town Hall.  You can’t imagine the Addams Family without eccentric Uncle Fester played by Andy Hooper. Hooper made us smile with his charming performance, especially in the musical number, The Moon and Me. Kate Dyer had us laughing as kooky Grandma Addams and Jack Dolaghan delivered a confident performance as the deviant Pugsley. James Dolaghan commanded the stage as one of my favourite characters, Lurch. Dolaghan had a wonderful voice, which we heard briefly at the end of the production when Lurch sings, which was a real treat.

This was an extremely professional production by a company with impressive vocal abilities who could also deliver challenging harmonies, something some amateur theatre productions struggle to conquer. If this was the standard of the show at the final dress rehearsal with just a few tweaks left to make, then we are certain that this production is going to be a hit with local audiences this week!

Theatretastic 4/5:  We say: “This is an atmospheric, energetic, professional performance by an impressive company!”